McGuigan and his Capall Zidane, one of only three to reach the jump-off, finished with a time of 40.102, eight-tenths of a second ahead of Judge’s time of 40.994. U.S. Olympian Mclain Ward, on Azibantos, finished third, with four faults and a time of 42 seconds, even. Amanda Flint on Balotan would have joined them in the short course after a clear first round, except for a  time fault that kept her from a chance to jump for the blue.

“Obviously, I’m very happy with the whole thing. It was a nice course from (designer) Alan Wade,” said McGuigan, who also took first place in Wednesday’s $10,000 Brook Ledge Open Welcome. “I thought it was a good track for the $50,000 class,” he said, adding that he expects the courses will get tougher as the weeks go on. “I was happy that my horse jumped great,” he said.

McGuigan was the first to go clear in Round 1, “In the first round, there was skinny oxer in the middle of the triple took a lot of people out,” he said. “For me, that was the careful jump.”

He continued, “In the jump-off, it was Quentin (Judge) and Mclain (Ward), so I knew it was going to be quite fast.” As the first to go on the shortened course, McGuigan said he needed to set a fast pace without any faults, galloping between obstacles one to three, and then to the last fence. “I had to make the time up somewhere,” he said. “I just tried to be as fast as I could, and conservative on the turns – but really gallop hard. I knew I had to set a fast time with Quentin, and with Mclain in the class you always worry. Quintin also jumped clear, but fortunately didn’t get my time.”

Judge’s horse, HH Fyloe, is owned by Double H Farm. Ward’s Azibantos is owned by Group C LLC, and Flint’s Balotan is owned by The Coverboy Group. McGuigan said of his two major wins at HITS-on-the-Hudson I, “It was a great week - hopefully we'll replicate it. 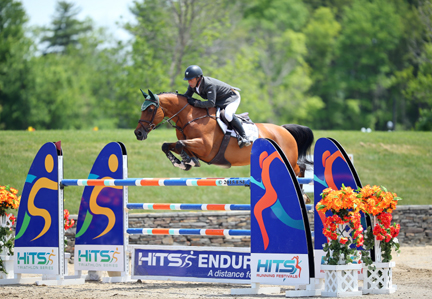 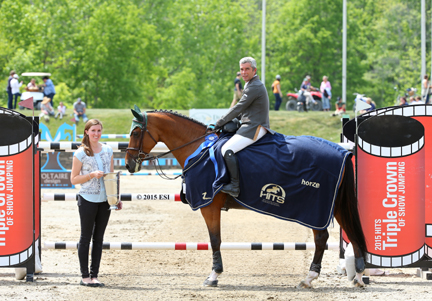 (c) ESI Photography
Ronan McGuigan and his Capall Zidane are presented with the blue ribbon after winning the $50,000 HITS Grand Prix on Sunday, May 24, 2015.

Elizabeth Stewart and KT Eber topped field of 31 riders and a 13-horse jump off to emerge victorious in the $10,000 Marshall & Sterling Tuffrider/Equine Couture Children’s/Adult Jumper Classic on Saturday at HITS-on-the-Hudson.

During the fast-paced jump-off, the lead changed hands three times, with Stewart going ninth and ultimately resetting the Great American Time to Beat with a clear time of 35.177 that would hold until the very end.

Going first in the jump-off was Alexandra Barnes on her Why Not Me, riding swift and clear to master tight turns and set the Great American Time to Beat at 37.699 seconds, which seemed at first that it might hold, particularly after the next two riders had rails.

Indeed Barnes’ time held until the fourth rider, Katherine Anne Brewer, on Pulsatilla W, owned by Martha King, completed the next clear jump-off round in a time even quicker than Barnes – an expeditious 35.494 seconds. Four of the next five riders had faults as well, and only one went double-clear, but in a time slower than Brewer.

Then, Stewart entered the ring. “I actually wasn’t sure how fast everyone had gone, and I just did what my trainer told me to do and hit the number of strides,” she said. Going fast and clean, she bested Barnes’ time,to finish the course a quarter-second faster.

“When in doubt, he’s fast across the ground,” said Stewart, of her 18 hands  gelding Belgian Warmblood. “He does anything I ask,” said Stewart, as she walked KT Eber after the awards presentation a victory lap around the course.

But Barnes was a good sport about placing third. “It’s terribly cliché – it feels great to do well but really, it just feels great to be on my horse. Having her do well is wonderful.” 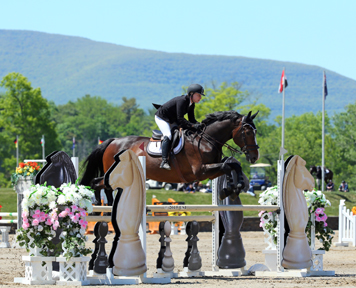 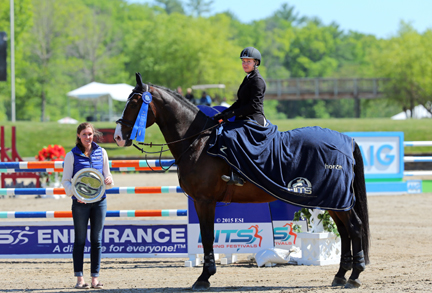 (c) ESI Photography
Elizabeth Stewart and KT Eber are presented with the blue ribbon after winning the $10,000 Marshall & Sterling Tuffrider/Equine Couture Children’s/Adult Jumper Classic at HITS-on-the-Hudson I, Saturday, May 23, 2015.

McKayla Langmeier and Highland Van't Heike emerged in the $10,000 Junior/A-O Jumper 1.45 Meter Classic, held in the Grand Prix ring on Sunday, after a faultless ride and a swift jump off time of 39.212, besting the second-place finisher Karen Polle on her Bottom Line, by less than half a second.

In the four-horse jump-off, Danielle Torano and Herault, owned by Jimmy & Danielle Torano, rounded out third with a double-clear ride and a time of 40.521 seconds, followed by Danny Mahon Chopper 5, owned by KW Mahon Inc., who picked up four faults in the jump-off and finished the course in 42.171 seconds.

The $10,000 Junior/A-O Jumper 1.45 Meter Classic held each week at HITS Saugerties is a qualifier for the Vetera® XP Vaccines $250,000 Junior/Amateur-Owner Jumper Prix at the HITS Championship on September 5-6 in Saugerties.

About JPC
JPC, makers of Equine Couture, TuffRider, and other notable equestrian brands. JPC's story is an international story of passion for horses and determination to make a dream into reality. In 1992, an accomplished horseman was having second thoughts about the uncomfortable, expensive, synthetic clothing he-and his fellow riders-were stuck wearing. He knew he wasn't alone in his frustration. Varun "Timmy" Sharma began researching, designing and working tirelessly to build a new, forward-thinking clothing company: JPC. He took his unconventional apparel-made with comfortable, natural fibers-from his small JPC factory in New Delhi to the markets of Europe and America. Soon, the American demand for Timmy's clothing led him to set up a JPC headquarters in Pennsylvania. To shop JPC products, visit www.breeches.com.

About Boehringer Ingelheim
Boehringer Ingelheim Vetmedica, Inc. (BIVI), makers of Vetera® XP Vaccines, is the U.S. animal health division of Boehringer Ingelheim Corporation, a family-owned company founded in 1885 in Ingelheim, Germany. Over the past 25 years, BIVI has supported its growth through research and development of innovative products for the livestock, equine and companion animal markets. Innovation and research are the keys to BIVI success. Dedicated to improving the lives and well-being of animals, BIVI continues to seek ways to further research and develop optimum solutions for the animal health industry.