OCALA, Florida (March 20, 2015): HITS, Inc. is pleased to share the official Great American $1 Million Grand Order of Go for the second jewel in the HITS Triple Crown of Show Jumping. On Monday, March 23 at 6pm, World Cup champions, Olympic Gold Medalists and Grand Prix heroes will converge in the Ocala Horse Properties Stadium at HITS Post Time Farm for a chance at the richest purse in show jumping and world-wide fame.

HITS will livestream the Great American $1 Million Grand Prix on USEF Network and on HitsShows.com, offering equine enthusiasts around the globe a front row seat for the iconic class. The Great American Million will air at 6pm EDT / 3pm PDT.

The biggest names in horse sport will flock to the final day of the HITS Ocala Winter Circuit for Million Dollar Monday with hopes to go home victorious.  Highlighted Riders to Watch include:

Kevin Babington
Known best for flying the Irish flag in the 2004 Athens Olympic Games, Kevin Babington brings international flair to the Great American Million. While riding is his number-one passion, Babington has a keen interest in buying and selling horses, and knack for choosing stars.  With buyers scattered throughout Europe, he is always on the hunt for his next four-legged star. After his FEI Nations Cup win at HITS Ocala earlier this year, Babington is hungry to stay on top.

Beezie Madden
For nearly three decades, Madden has represented the United States in the world’s most prestigious competitions, including winning three medals at the Olympic Games: Team Gold in 2004 and 2008, as well as Individual Bronze in 2008. She has also won Team and Individual Silver at the 2006 World Championships and Team and Individual Bronze at the 2014 World Championships, in addition to becoming the Rolex/FEI World Cup Champion in 2013. In 2014, Madden placed fourth in AIG $1 Million Grand Prix at HITS Thermal and 12th in the Great American $1 Million Grand Prix.

Eduardo Menezes
Fresh off a fourth place finish at the 2015 AIG $1 Million Grand Prix at HITS Thermal, Brazilian Eduardo Menezes hopes to move up the leaderboard and take home the big check at Million Dollar Monday. Menezes, now residing in Carlsbad, California, helped his native team secure gold at the 2013 Nation’s Cup in Italy and a silver medal at the FEI Nations Cup Final in Barcelona.

Meredith Michaels-Beerbaum
Meredith Michaels-Beerbaum, winner of inaugural AIG Thermal Million in 2014, is an American-born German equestrian internationally recognized as a leader in the sport. In 2008, she ranked #1 in the Rolex World Rankings for 11 consecutive months, to top an already impressive resume including three FEI World Cup Finals wins, making her the first woman in history to do so, and a fourth place individual finish at the 2008 Olympics.

Ian Millar
Aptly dubbed "Captain Canada" by his fans, Ian Millar has ridden in more team competitions than any other Canadian rider and is an eight-time Canadian Show Jumping Champion. At the 2012 London Olympics, Millar set a world record by becoming the first athlete in any sport, from any nation, to represent their country in 10 Olympic Games. Millar achieved his best Olympic performance to date in London with a top 10 finish individually. At the FEI Nations Cup at HITS Ocala, Millar, riding for Team Canada, placed third in the namesake class.

Andre Thieme
Germany’s own Andre Thieme is the reigning titleholder of the Great American $1 Million Grand Prix. After a remarkable performance at the first annual Million Dollar Monday in 2014, Thieme became the second rider ever to win two of HITS $1 million Grand Prix classes when his 10-year-old mare, Contanga 3, carried him to the top of the leaderboard. As March 23 approaches there is one question on everyone’s mind - will Andre Thieme defend his title or will a new champion be crowned?

McLain Ward
McLain Ward of Brewster, New York, is no stranger to the show ring spotlight. Having competed in more than 10 FEI World Cup Finals and numerous FEI Nations Cup competitions, Ward has a slew of career highlights including Gold Medal finishes in Team Jumping at the 2004 and 2008 Olympics and a Team Bronze Medal at the 2014 World Equestrian Games. Additionally, Ward is a two time HITS $1 Million Grand Prix winner having taken home the blue ribbon from the 2010 and 2012 classes from HITS Championship Weekend in Saugerties, New York.  Just last week, Ward placed second in the AIG Million at HITS Thermal securing his name on a $200,000 prize check.

General admission tickets for the Great American Million are $10 and available in advance through OcalaTix.com ($2 processing fee applies). Tickets may also be purchased in person at the Horse Show Office at HITS Post Time Farm or by calling 352.867.0508. Tickets will also available at the gate the day of the event.

Day VIP passes available by pre-order only for $100 per person. Includes ringside seating with a deluxe crudité table, international cheese display, dessert display and private cash bar. Day VIP passes available online at OcalaTix.com ($5 processing fee applies) or by phone at 352.867.0508. Day VIP tickets must be purchased in advance and are expected to sell out prior to the event. 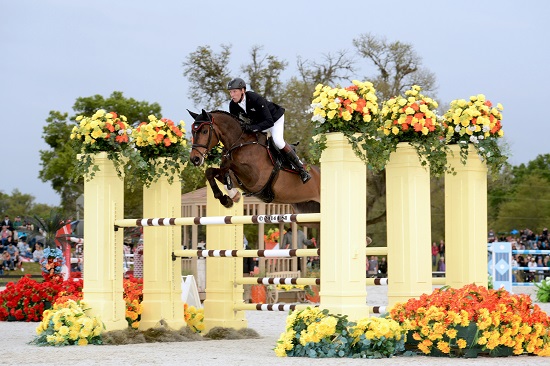