OCALA, Florida (March 5, 2015): The fourteen horses in a fast-paced jump-off in Thursday’s $25,000 SmartPak Grand Prix at HITS Post Time Farm in Ocala led to four lead changes, out of which Cara Raether of North Palm Beach, Florida, riding Lyonell, owned by Trelawny Farm LLC, came out on top. Raether was the fourth to go clear in the jump-off and held on to her lead in 43.049 seconds for the hotly contested win.

During the jump-off, the first to go clear was Dr. Fernando Cardenas of New Hill, North Carolina, riding his own Quincy Car, who stopped the clock at 45.427. His lead was short-lived as McCrea and Aristoteles V went one better, slicing off a fraction of a second. Flint, on Superbad, went even more quickly, and looked impossible to beat until Raether took her shot at the prize. Crossing the timers nearly three-tenths of a second faster, Raether relegated Flint to second place. Jared Petersen of Archer, Florida, riding Derek Petersen’s Titus 2:11, finished fourth with a time of 44.444, dropping Cardenas to fifth place.

After the class, Raether said, “I didn’t think Amanda could be beaten, but my horse has a big stride and I just went with the numbers. The courses have been great all week. They asked the right questions and you could really get going. Lyonell is 14-years-old and I’ve had him for eight years, so we know each other really well.”

Tickets are on sale now! General Admission is $10, or enjoy all the benefits of Day VIP for $100. To order, go to OcalaTix.com (online service fee applies), visit the HITS Post Time Farm Horse Show Office or call the office at 352.867.0508. 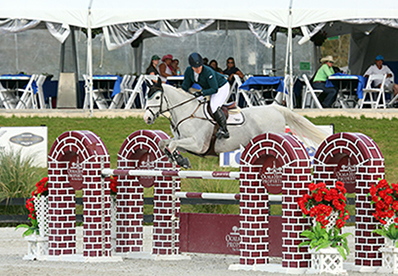 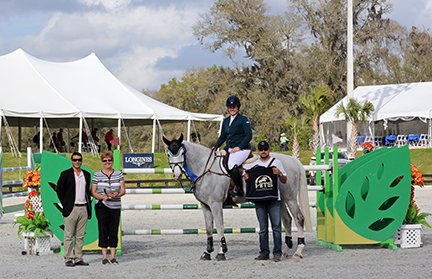 Eight jumped clear in the first round. In the jump-off, three riders rode double-clear with Millar maintaining a three-second lead at 38.314 over eventual third-place finisher Jonathan McCrea of East Windsor, Connecticut, who rode Captain Jack and clocked in at 41.327. Millar's mark held up until Collier and Finnegan trotted into the ring. Finnegan rubbed a few rails, but left all of them in their cups to finish in 38.109 for the win.

Collier said of the 11-year-old Irish-bred Finnegan, “The girl [Brown] that owns him did the junior jumpers and when she went to school and didn’t have time for him, I was fortunate enough to get the ride. He hasn’t seen a lot of tracks like this. I thought the course was fantastic. It was one of those courses that was really active but not trappy.”

About SmartPak
SmartPak Equine was created in 1999 by riders and horse owners, for riders and horse owners. With experience in Hunter/Jumper, Equitation, Dressage, Polo and Reining, SmartPak’s founders have logged many miles in horse country. SmartPak’s mission is to provide a simplified approach to administering nutritional supplements and medications to horses across America. Embraced by riders of all disciplines, SmartPak offers a broad line of horse health, products, show apparel, tack, and equine pharmaceuticals through their catalogs and website.