OCALA, Florida (March 8, 2015): HITS Ocala VIII finished up with the $50,000 Purina Animal Nutrition Grand Prix, held in the Ocala Horse Properties Stadium on Sunday. Angel Karolyi of Aiken, South Carolina, riding McLain Ward’s Wings was the only rider to have two clear rounds for the win.

In the jump-off, VanderVeen went first and four faults at the tricky combination, finishing with a time of 48.662, for third place. The winner of last Sunday’s $50,000 Ring Power Grand Prix, on Bull Run's Faustino de Tili, was happy with her ride saying, “My horse jumped really well. We just got a little unlucky at the combination [with a downed rail at 8b].”

Eight-year-old Liratus and Devin Ryan jumped huge over the triple bar then stopped at the combination finishing seventh with multiple faults. Next up was Quincy Car and Cardenas who went clear all the way to the end, and just caught the back rail of the final oxer for four faults in 47.162. The next three had eight faults, leaving the door open for Karolyi, who took a chance at the clear and made it all the way home for the win.

Karolyi said, “It was risky going for the clear but I heard them announce that there were only two with four faults as I was riding towards the first fence and I figured if I had a rail I would still be third, so I took the chance — I wanted to win."

Tickets are on sale now! General Admission is $10, or enjoy all the benefits of Day VIP for $100. To order, go to OcalaTix.com (online service fee applies), visit the HITS Post Time Farm Horse Show Office or call the office at 352.867.0508. 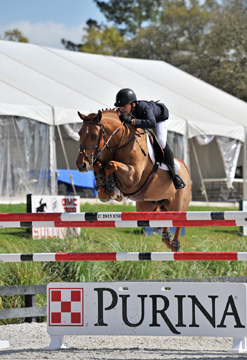 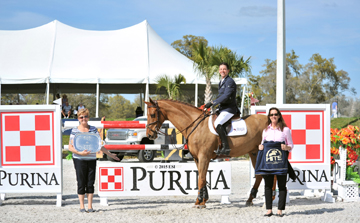 About Purina
With more than 100 years of experience, Purina is the most innovative manufacturer of equine nutrition in America. The feeds Purina produces affords horse owners dependable, solid and consistent product. Feeding choices are largely affected by the lifestyle of the horse. Purina’s premium feeds can accommodate any and all of a horse’s needs. Today, horses are living substantially longer lives and Purina and its products are proud of the role they have played in this positive development. How we take care of our horses is a reflection of our love for the animal and the joy they bring us.