Fifteen horses made the jump-off and nine went double-clear. John Pearce, of Bermuda Dunes, California, and Chianto, owned by Forest View Farm, Inc., went second in the jump-off, finishing in 35.047 with the first double-clear, setting the Great American Time to Beat that held up through the next eight competitors who tried to catch him. Fellers, of Wilsonville, Oregon, went 13th in the jump-off, completing the round in 34.488 seconds to take the lead.

Fellers said after the class, "I never get enough of riding this horse and I tell you winning never gets old. The competition, the chase me and chase you, the winning, the making them all run faster, just never gets old. The longer the breaks between wins — congrats Will and the others — the more I want it. I am a bit of an addict about it. Danny Foster [course designer, from Milton, Ontario] set a beautiful Friday course and did a great job, but we knew he would."

Fellers added, "Flexible is as amazing as ever and he's proving that, at 19-years-old, he is still a winner. This is all uncharted territory and a new experience for me. I have never had an older horse and I keep waiting for him to 'tell' me something about slowing down...but he just keeps saying, 'Let's go,' and comes out ready for the win. He was sound and fresh today and played like crazy in this wind. He is really special."

Pearce observed, "These classes are what makes these jumpers special...This group is a tough group who have come to win and so have I...but I also came to make them run. That's what makes the sport so fun. It was even fun being second to Fellers today, but he had to run quite fast to beat me.”

Olympian Will Simpson, who has won eight HITS Desert Circuit Grand Prix in 2015, placed tenth in this class on Katie Riddle, owned by Monarch International. Simpson’s time would have placed him third overall, but a rail down on the second jump pushed to 10th place with four faults.

Bond seems primed to defend her 2014 AIG $1 Million Grand Prix title, with the 2015 contest just two weeks away. She has a tough hill to climb as she'll face keen competitors who have shown their championship mettle in the desert Grand Prix ring over the last six weeks. The stage will surely be set for showjumping excellence when they meet in the ring on March 15 to claim the first jewel in the HITS Triple Crown of Show Jumping.

iJump Sports contributed to this report. 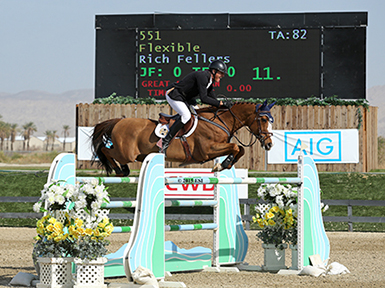 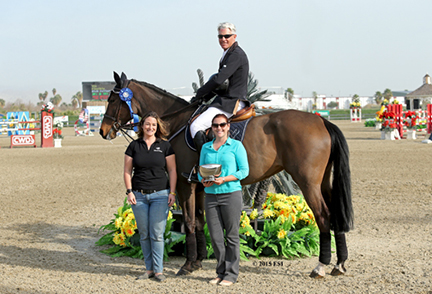